Get fresh music recommendations delivered to your inbox every Friday.

by Burnt Sugar The Arkestra Chamber 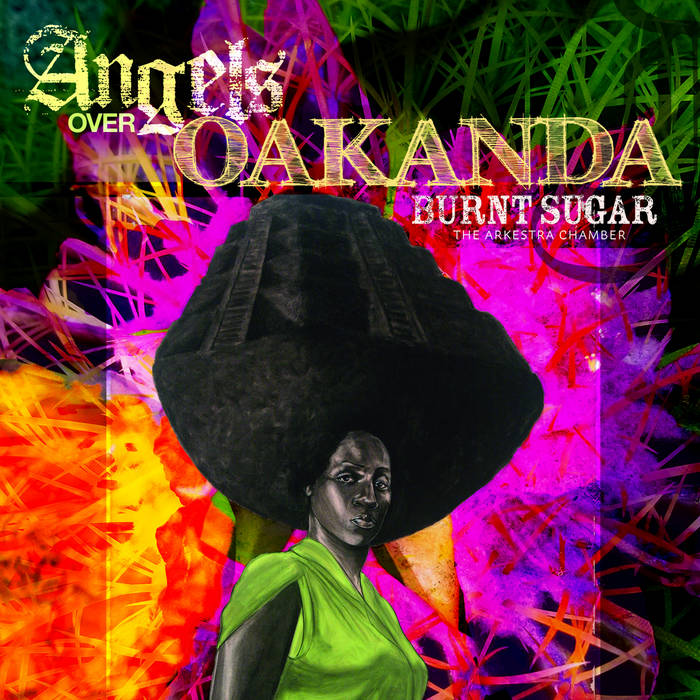 ''Burnt Sugar The Arkestra Chamber returns to form with Angels Over Oakanda, a four-song suite that represents its first new studio album since 2017. The title refers to the Bay area — Oakland, one of the centers of Black culture. And the first movement opens with the funky bassline of co-leader and Dayton, Ohio groove master Jared Michael Nickerson, who sets the groove. A swinging, hip tune reminiscent of ‘70s funk and Electric Miles, and a head-bopping gem.”~ Sheila Anderson ~ WBGO

“More than two decades ago, the cultural critic Greg Tate founded Burnt Sugar, a sprawling New York improv unit, currently numbering some two dozen members, that roam freely through all manner of internationally historical styles, particularly Black music. The bassist Jared Michael Nickerson, Tate’s co-leader, underpins “Angels Over Oakanda,” the band’s first album in four years, with rhythms that sweep the music along like a tide. Taking after the late Butch Morris, Tate conducts the players’ improvisations, which are sharp throughout, nowhere more so than over the skintight reggaeton groove on “Repatriation of the Midnight Moors Inna Oakanda.” ~ Michaelangelo Matos


From the hive-mind of Burnt Sugar Arkestra the Chamber massive comes “Angels Over Oakanda.” A new four-song suite of Conducted Improvisations and home studio orchestrations which treat space time and genre like trans-dimensional silly-putty while giving polyphonic and multi-rhythmic dap to the visionary legacies of The Moors and the Black Panther Party.


MC Bruce Lee from NYC’s Downtown Music Gallery says … “It has been around 4 years since the last release of new music was dropped by our good friends, Burnt Sugar. Considering that has been more than 20 years since Greg ‘Ironman’ Tate organized this massive, ever-evolving, beyond categories large ensemble, the Burnt Sugar Arkestra has delivered a dozen wonderful discs (1, 2 & 3 CD sets), each one a gem blending the best of many worlds: funk, jazz, rock, R & B, fusion, prog, hip-hop, psych and much more. Plus spirited collaborations with Butch Morris and Melvin van Peebles. Plus, not so strangely enough, their new one sounds nothing like anything they’ve done previously.

Over those two decades the personnel has also evolved from gig to gig, disc to disc. There are, of course, a handful of regulars: Greg Tate, Jared Michael Nickerson, Avram Fefer, ‘Moist’ Paula Henderson, Ben Tyree, Satch Hoyt and André Lassalle.

‘Angels Over Oakanda’ is a four song suite and Oakanda refers to a section in the Bay Area (Oakland) where Black Culture is appreciated and nurtured. The title track is long and winding and has an infectious, laid-back, funky, dream-like groove. Five horns, alto, tenor & bari saxes, flute & trumpet, all swirling together with several guitars, keyboards and percussion all creating a cosmic kaleidoscope of rainbow colors. That groove is most infectious, slamming, sort of Electric Miles for the 21st Century. So good, you don’t want it to end! One of the things that stands out here is el bassist Jared Michael Nickerson, whose bass is at the center the swirling storm throughout this entire endeavor. On “Repatriation-of-the-Midnight-Moors”, his bass sounds sped up and is even more astonishing! The groove here is right out of drum ’n bass, sly, phat and center to make you want to shake your booty! When I played this piece at store on Monday (8/30/21), a bunch of multi-colored folks all started to dance! John M & myself just had to join in, so we did just that.

Reeds wiz, Satch Hoyt plays some superfine flute throughout this piece. Another great thing about this disc is how well it is produced: totally awesome! On “Oakland Overdrive”, the band really takes off with some superb electric piano, furious electric bass and layers of percussion. Plus the horns are well-produced with some of that seventies, swirling reverb that many of us old-timers recall with deep fondness. The final song is a remix of “Oakanda Overdrive” with Lisala Beatty’s immensely enchanting voice(s) on top! This is the best feel-good record of the year, both your booty and your mind will feel better after you get down to it!”

BURNT SUGAR is a neo-tribal thang, aspiring to the condition of all that is molten, glacial, spacial, telepathic.
''A multiracial jam army that freestyles with cool telekinesis between the lustrous menace of Miles Davis’ On The Corner, the slash-and-om of 1970s King Crimson, and Jimi Hendrix’ moonwalk across side three of Electric Ladyland.”- David Fricke, Rolling Stone. ... more

Bandcamp Daily  your guide to the world of Bandcamp

Bonobo stops by to talk about his new record Fragments